Feel the fear; But don’t listen to it! 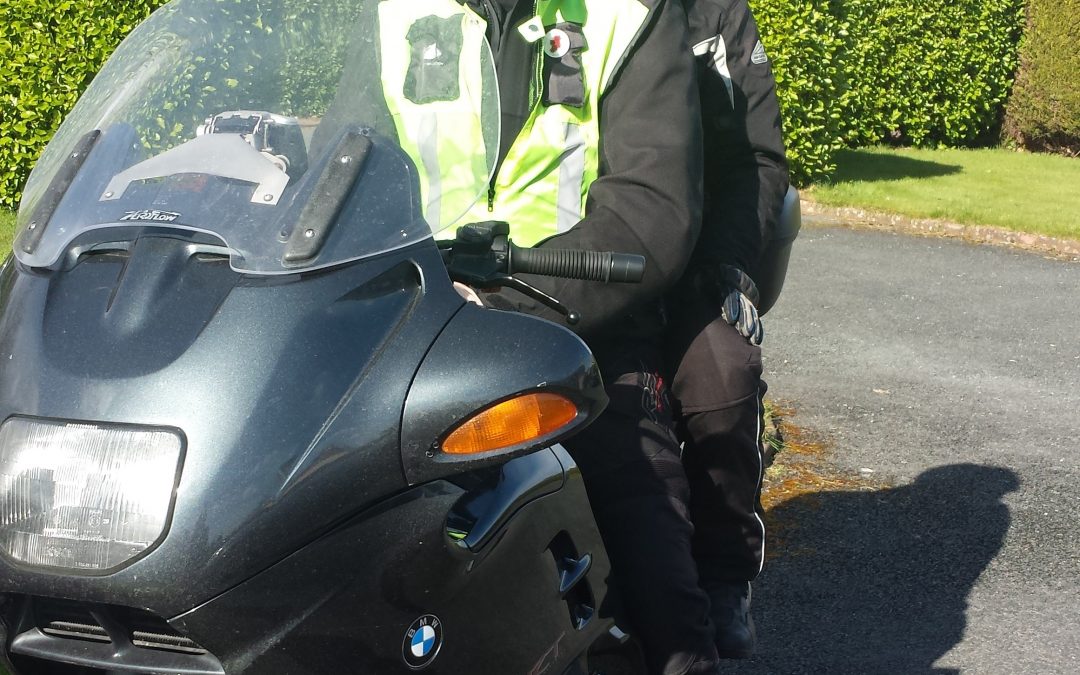 My husband rides a motorbike for the last number of years and loves it. He heads off on these photo rally days, taking photos in far flung corners of Ireland, coming back with descriptions of wonderful scenery, great cafes and photos of often weird yet wonderful ruins or memorial sites.

You can see where this is going, can’t you? For the last few years, he’s been hinting big time that I should come with him on some of the weekends away. And I have on occasion; I get in the car and drive to the venue while he sets off on his bike and meets me there! The biker club he’s with has a wonderful mix of people that have done wonders to break down my prejudice of what bikers were like! In this club anyhow, they’re mostly middle aged, interesting yet ordinary men and women who have a passion for bikes, scenery and comradery.

I’ve been terrified of going on the motorbike. Well, actually, let me back up a little…I wasn’t scared because as far as I was concerned, it wasn’t ever going to happen! But more recently, a lot of the female members in the club have been trying to persuade me to give it a go.

I’ve been scared of going on the bike. And these are the reasons why: I’m terrified of getting hurt or injured – I like myself a lot and don’t like pain. I work for myself so if I’m out of commission, there’s no money coming in. We have one daughter – what would happen to her if anything happened to us? But yet somehow, insanely, I found myself agreeing to ‘go for a spin’.

Now for those that don’t know about these things, being a good pillion passenger requires that you trust the driver, move with them and most importantly; resist the temptation to ‘correct or right’ the bike when going around corners. You need to let the driver be the driver.

So, the first part is easy; I trust Eric completely. Moving with the driver sounds as though it’s a skill that can be learned so that sounds possible. But as I neared the morning for our ‘spin’ and struggled with the terror building inside, I realised that yes I was afraid of falling off or getting hurt etc BUT what I was really really scared of was ME on the bike!

For those that don’t know me well, let me share a well known secret! I like to be in charge. I’m reassured when I know what’s happening. If I did ballroom dancing, I’d have to remind myself not to take the lead! In team building events when asked to close my eyes and fall backwards for others to catch me, I fail miserably. I like to take the lead – I do a good job in that role. I can be brave when I’m leading and it’s very scary when I’m not. I haven’t much skill (or practise) at being the follower. It scares the life out of me, having to depend on someone else and assume that they have it in hand.

So with my recent mantra of Feel the fear and Do It Anyhow fresh in my mind, we went for our spin. It’s all in our heads at the start you know. I call it the Fear Voice. It starts to tell me things, scary things that might happen. If I listen to it at all, it then adds images of the bad stuff which then seem to fuel even more of the Fear Voice. Then of course, there follows the physical reactions which are different for everyone but very uncomfortable. It’s Feeling the fear that most of us are familiar with – let’s face it, who likes having to keep running to the loo all the time when feeling scared.

Do I want to be a biker? I don’t know yet but I’m going out again to check it out and to remind my Fear voice that I don’t need to listen to it all the time. That I do have a Brave Voice too.

We often Feel the fear but what’s making that happen in your body? What does your Fear Voice sound like? What crap does it tell you? How would your life be different if you didn’t listen to it for a while? Just wondering?

This website uses cookies to improve your experience while you navigate through the website. Out of these cookies, the cookies that are categorized as necessary are stored on your browser as they are essential for the working of basic functionalities of the website. We also use third-party cookies that help us analyze and understand how you use this website. These cookies will be stored in your browser only with your consent. You also have the option to opt-out of these cookies. But opting out of some of these cookies may have an effect on your browsing experience.
Necessary Always Enabled
Necessary cookies are absolutely essential for the website to function properly. This category only includes cookies that ensures basic functionalities and security features of the website. These cookies do not store any personal information.
Non-necessary
Any cookies that may not be particularly necessary for the website to function and is used specifically to collect user personal data via analytics, ads, other embedded contents are termed as non-necessary cookies. It is mandatory to procure user consent prior to running these cookies on your website.
SAVE & ACCEPT